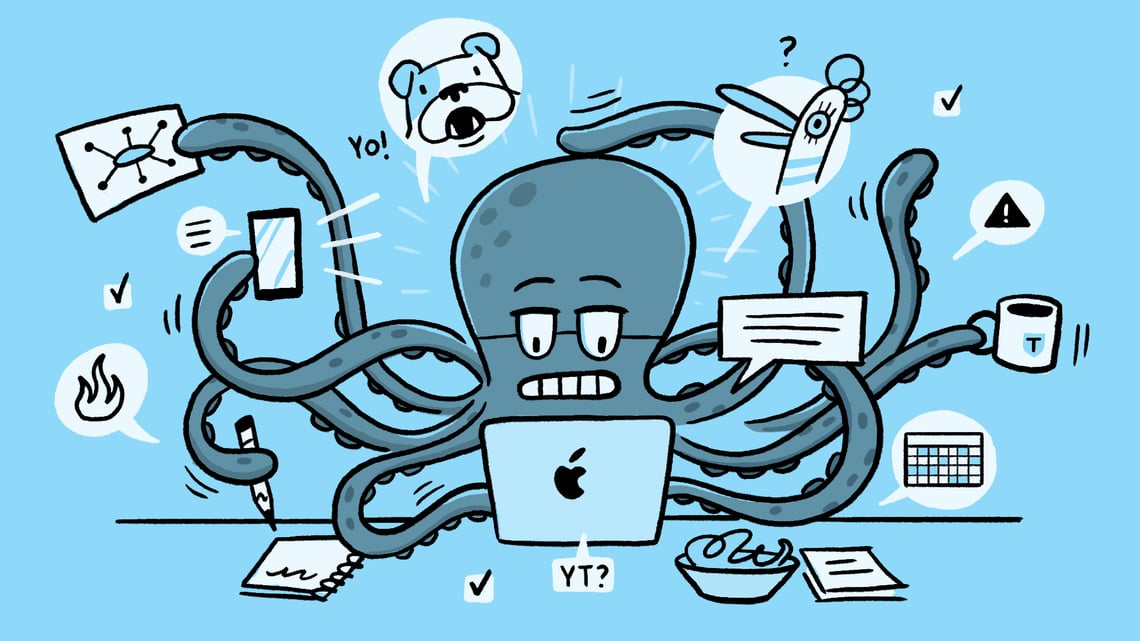 The business impacts of multitasking vs monotasking

Right now we're wrapping up an animated video project about multitasking. I wrote the script, so I had to dive deep into a lot of reference material from the client, as well as do independent research. The video is about the pitfalls of multitasking and the benefits of monotasking. While the audience is internal-only for the client and it can't be shown publicly, the lessons I came away with can and should be shared.

The headline (in fact, the title of the video) is this: Multitasking is a myth. Actually, we immediately go on to say, "It’s a false hope reaching for an unrealistic goal built on a lie." ...if you want to know how we really feel about it.

This is something I've come to accept and believe, but have yet to truly put into practice. The realities of creative client work mean that we're often pulled from one project or meeting to another, from creative brainstorming to solitary email management to "a quick Slack chat" about something that happened last week or will happen next week, then back to a project, then onto another project, and another... and that's just before lunch!

The problem is that while the outside world—the world of work—functions this way, in chaotic and unconnected fragments, our brains don't. They just don't. Our inner world, the engine that fuels our focus, charges our creativity, and powers our productivity can't do more than one thing. We simply cannot multitask, or, rather, when we do multitask we are profoundly unproductive and inefficient—even when it feels like the opposite.

All I know is that I no longer feel "productive" when I multitask. I used to, especially in my personal project work, but these days I see and feel the actual impact. It's the opposite of focus, the antithesis of getting things done... it's simply doing two or more things poorly rather than one thing well. Our client agrees, and has data that goes well beyond supporting the generally accepted truth that the more we multitask, the less we get done.

They've done the math to show that this negative impact doesn't just hit the individual, it hits organization. Because when humans become overwhelmed, frustrated, and inefficient, the business suffers. How? A study done by University of London found that our IQs drop by 10 points when we multitask—similar to where our brains were at eight years of age, or losing a night's sleep, or smoking a joint. And a study from the University of Sussex found that multitasking might actually damage your brain in more permanent ways: "high multitaskers had less brain density in the anterior cingulate cortex, a region responsible for empathy as well as cognitive and emotional control." Another study showed that the "context switching" we're required to do while multitasking impairs the prefrontal cortex, compromising our ability to plan and concentrate.

This impairment isn't just frustrating, it wastes time—both ours and our employers'. So in turn, the loss of productivity then hits the business in obvious and exponential ways. Every person that tries or is forced to multitask ends up wasting 40% of their time. We don't cognitively appreciate that almost half our time and effort is lost on any given day of juggling different projects, but it is. Whether it's getting back "in the zone", jostling between unconnected tasks, or repeatedly getting other team members "up to speed", we simply can't do our jobs as well as when we're allowed to focus.

Problematically, the world of work doesn't generally value focus or mental health the way it should. Businesses appreciate profit, and managers often mistake busy-ness for actual productivity. This is what makes our client's findings so interesting: as a business they can theoretically be 3x more profitable when they enable and allow teams to monotask.

Here's an edited, anonymized anecdote they use to talk about the benefits of monotasking. Below we've very much simplified the details and the dollars are just examples—nowhere near the real financials—but the math still shows the value. Our client has their own data as well, based on their people and their business, proving the value and demonstrating real-world benefits and wins.

Let’s look at what happens when we multitask at the company level over 24 months. We have a team of 6 people who need to complete 3 projects, A, B, and C. Each project has a different value, but takes the equivalent time of all 6 team members working for 6 months to complete each project. So, constantly switching, it takes 18 months to complete all 3. Add it all up and you end up with $132 of value after 3 project are in the market for 6 months.

Now, let’s see what happens when the team monotasks, meaning all 6 members work on the same project at the same time, tackling them sequentially. If they work at the same rate, then—like before—it takes 18 months to complete all 3. But now we can prioritize the more valuable projects, so they have the most time in market to accrue value. When we add it all up, now we get $294 of value—more than double what we got when multitasking.

...40% of the original time was lost due to context switching. By monotasking, we aren't just able to prioritize, we're also able to finish all 3 projects faster. Project A launches 2.4 months early, Project B launches 4.8 months early, and Project C launches 7.2 months early. They're all done faster, are in market longer, and this results in a value of $388 over 24 months, nearly 3 times the original scenario in which the team multitasks.

Like any genericized anecdote, YMMV. But the video we created visualizes this story in greater detail, and of course explains the cost of multitasking and the value of monotasking. It ends with a call to action to begin to commit to supporting teams in their efforts to monotask, so they can get more done—and better. The goal is to help leadership better appreciate the true cost of constant context switching.

For me and many creative workers (for all kinds of workers, in fact) that negative mental and productivity impact of multitasking is clear. To us, it's personal. We can feel it. We need flow to do our best work, and flow requires focus.

We hope the video we wrote and designed helps our client to communicate the negative productivity and financial impacts of multitasking at the organizational level as well... and we know that visual storytelling is a powerful way to accomplish that.