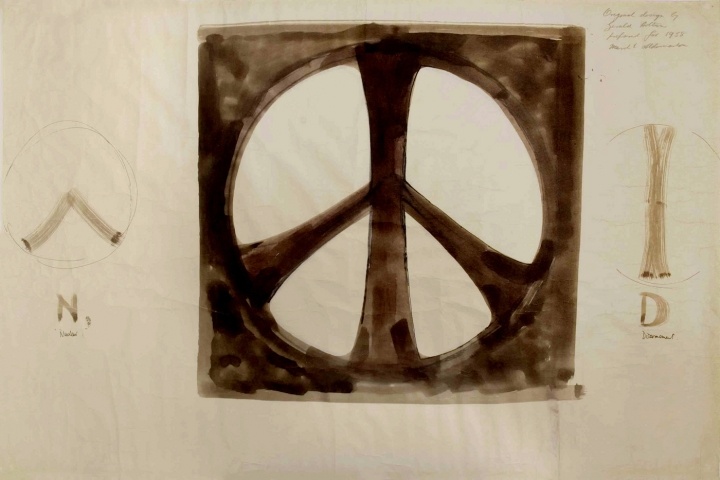 The story of the peace sign (and other iconic symbols)

Sixty years ago this month, British artist Gerald Holtom—on behalf of the Campaign for Nuclear Disarmament—designed the peace symbol.

It's a well-known secret (if you're a designer) that the symbol actually has meaning embedded in it. Enclosed within a circle are two shapes: a caret shape, like an arrow pointed upward, and a vertical line.

While the symbol is instantly recognizable and referred to as the peace symbol, those shapes actually are graphical depictions of the semaphore flag signals for the letters N and D. The N is one flag up and one down at 90º while the D is each flag held out at downward 45º angles.

The letters stand for Nuclear Disarmament.

The designer said he also saw himself in the mark—as a man standing with his arms outstretched, palms up, in despair.

As for Holtom, he passed away in 1985. Two peace symbols adorn his tombstone in Kent, England, which is engraved with this epitaph: “Campaigner for Peace. May he find peace.”

The original sketches are going on display next month at London's Imperial War Museum.

What other well-known symbols have some sort of literal meaning?

It's thought that the checkmark is the result of ancient Romans marking a "V", short for veritas (the Latin word for true), to indicate that something was true, confirmed, or otherwise OK. Over time the V shape standardized as the checkmark we recognize due to the fact that ink did not start flowing immediately from the pens of the time.

The technology is named after the 10th-century Danish king Harald "Bluetooth" Blåtand Gormsen, and the symbol is made up of the old Scandinavian runes H and B, combined into a bind rune, or a ligature. His nickname's dubious legend is that he loved blueberries so much his teeth were stained blue, but more importantly, he was known for allying war-prone Vikings. Similarly, the Bluetooth technology was meant to "unite" devices from different, even hostile, manufacturers, and was named in 1997.

The on/off symbol is an homage to the days when nearly all powered devices were controlled by manual switches marked ON and OFF. As technology went digital in the 20th century, those concepts were replaced by the number 1, meaning "ON," and a zero, meaning "OFF." The icon is simply a 1 and a 0 super-imposed over each other, but, of course, depth or illumination is now required to indicate the toggled state.

These are common, well-known examples. But at some point they were all new and unknown. What is it about them that enabled success? Is it that they inherently have meaning and therefore make sense? More likely, it's just that we've lived with them, so we recognize them, and now we just "get" them instantly.