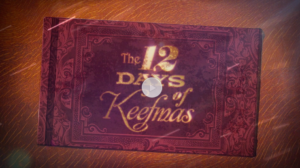 We wish you a Merry Keefmas

In the spirit of debauched inclusivity, this holiday season Tremendousness have decided to celebrate something everyone can believe in—something all of us can look at with a wide-eyed sense of wonder and awe—Keith Richards’ 70th birthday, which is just a couple days away on December 18.

Who says you've got to live threescore and ten years? There’s only one source of information I know that says that, and even that doesn’t say everybody’s got to make it. Everybody can't make 70.  I can't even imagine what it’s like, to be 70. When I was 20 I couldn’t imagine what it would be like to be 28.

So, yeah, he made it to 70. Let’s raise a toast to the long career of a tremendous artist—and to what we hope will be a tremendous new year for you and yours and us. Now sit back and check out “The 12 Days of Keefmas”, our 2013 holiday video. We’ve filled it with Keith lore, legend, and lawlessness (hey, it’s about Keith Richards, so don’t expect a kiddie cartoon—even though we did have kids sing the song). And if you end up a bit puzzled over all the obscure Keith references, we’ve got some links at the end of this post that should clear everything up—and make Mr. Richards even more fantastic in everyone’s eyes.

With love from your friends at Tremendousness,
Bill, Chris, Lisa, & both Scotts

As a bonus, we’d like to share a tribute from Tremendousness’ Project Manager, Lisa Vorst. To say she’s a fan would be selling her short—but so would calling her obsessed. She's way into Keith, as you'll see below.

I’ll be the first to admit that Keith hasn’t been much to look at since some time in the mid-70s.

But that’s not what this is about—my obsession has never been of the fan-girl, “Oh my God he’s so hot!” sort.

So what is it about? Well, we can start with the obvious. He’s a pretty great guitarist—maybe not the best ever, but he wrote "Satisfaction" in his sleep! Not being blessed with musical talent, I have to rely on the other Keith freaks I know, my cousins, to assure me that his five-string playing was a real innovation. Apparently, you can’t play "Start Me Up" in standard tuning with six strings. From the hits everyone knows to the Stones rarities and his solo work, there’s some pretty great music there.

Then there’s his on-stage persona. I was not lucky enough to be there when the Stones were performing at the height of their career, but over the last 20 years, every time I’ve seen Keith play, I just get the sense that he’s having a great time up there and would be doing it whether there were 100,000 people or 100 watching. Call me naïve, I mean, how could you not enjoy your job when it’s rock and roll, but I love watching him play and there is something there that is different than anyone else I’ve seen.

But it goes deeper than that. It’s about the second part of those lyrics from 1978—feelin’ real well. My overwhelming sense of Keith is that he always feels good about himself—he does and says what he wants, and he doesn’t care what you think or how he looks. And he ends up looking pretty cool, despite the missing teeth of the '70s and the wrinkles he has now. I can’t explain why Keith is cool, he just is. Another Keith quote: “If you’ve gotta think about being cool, you ain’t cool.”

Speaking of saying what you want, he’s pretty damn witty too. Keith can throw out an insult as dagger sharp as the knives he used to carry. Just Google it. Or check out the “Insults” section of the book What Would Keith Richards Do?. Pretty funny stuff, unless you’re Prince, Elton John, or Bruce Springsteen. Keith’s brutally honest interviews and quotes have entertained me almost as much as his music over the years.

Which would make him seem like an asshole, but from what I read, and based on firsthand accounts from someone who spent time with him, he’s actually a really nice guy—even a gentleman. And he is kind to animals too—he rescued his dog Rasputin from the streets of Moscow and welcomed him into his island home on Turks and Caicos.

So, in the end, I’m not sure if I made my obsession any clearer for you. I love Keith Richards; I throw a birthday party for him almost every year (Keith, if you are reading this, you are always welcome)—and like him, I really don’t care what you think about it.

Happy birthday, Keith. Thanks for all the entertainment!

An annotated guide to "The 12 Days of Keefmas".

Also, we took a bit of artistic license at the end of the video when Keith’s good friend and the Rolling Stones’ go-to sax player Bobby Keys drives away in Keith’s car, the Blue Lena. As far as we know, Bobby never drove it—but some famous adventures did go down in that car.

So there you have it.